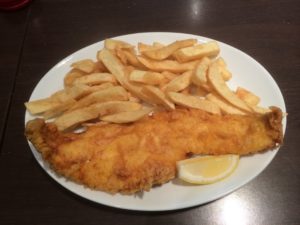 First introduced in the UK in 1860. The story is that Joseph Malin´s shop was set up in Cleveland Street in London´s East End in 1860. This has been disputed and said the first chip shop was John Lees in Mossly, near Oldham in 1863. Fish and chips has fewer calories than other popular take-a-ways and an average portion has fewer calories, saturated fat and salt than a cheese and tomato pizza. In the UK, cod is in 6 out of 10 sold dishes followed by haddock with 2.5. The fish and chips market in the UK uses annually over 50,000 MT of cod and haddock fillets and the most popluar source are frozen at sea fillets from freezer vessels catching in the North Atlantic around Iceland, Norway and Russia. In the USA, the fish and chips is often called „Friday night fish fry“. Source: The Independent (UK) 10. January 2010. FOS.